The Story of the Birth of the Iron Workers - Episode 1

I have been meaning to write this article from the viewpoint of Tetsuro, but I have not done so, so I will start today. I would like to start by asking when the Tetsuro organization was founded and what kind of union it originally was. Japan National Railways Labor Union Iron Workers' Union was also originally an organization separated from the National Railway Workers' Union First of all, I would like to say that Tetsuro and Doyo, as well as Doyo, originally separated from the Japan National Railways Workers Union. The first union to split off from the Japan National Railway Workers' Union was the Locomotive Workers' Union, which split in 1951. It was the predecessor of Douro, and was a union consisting only of locomotive crew members and inspection and maintenance personnel. The moderate faction was the mainstream and maintained good relations with the employer side, supporting Torazo Kijima, who had served as the head of the operation bureau and managing director, as
コメントを投稿
続きを読む

Proceedings of the National Diet Hearing on the Sakuragicho Accident No. 1 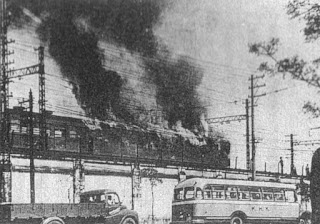 First of all  I am not sure how much I can go into today, but I will start uploading the transcripts of the parliamentary inquiry into the Sakuragicho accident (the parliamentary inquiry of the driver, conductor, and electric power district at the time). I hope to add as much commentary as possible, but this is my first time to do so, and I may only be able to leave a few notes. Now, I would like to give you a brief overview of the Sakuragicho accident.    What kind of accident was the Sakuragicho accident?  Let me quote from our website "When Japan National Railways existed".      A Keihin Tohoku Line train caught fire at the Sakuragicho station of the Japan National Railways (JNR) in Yokohama on April 26.     At around 1:40 p.m., a down train (Moha 63, 5-car train 1271B) from Akabane on the Keihin-Tohoku Line was approaching the overhead wires 50 meters before the final Sakuragicho Station when it was discovered that the insulators had been accidentally cut and were hangin
コメントを投稿
続きを読む

- 11月 05, 2022
SL "Yamaguchi" in operation for Hatsumode (New Year's visit) 1/1     SL "Yamaguchi" will be in operation for the first time in this season for the general public, with C581 in tow, until the 3rd. Kabe Line [Discontinuation of Freight Business] Yokogawa-Kabe line (freight business completely discontinued) 1/1 The JNR Joetsu, Tohoku, and Tokaido Shinkansen lines are temporarily halted due to the 7.5 magnitude earthquake centered in the Kanto region. On the Tokaido Shinkansen, 49 trains on the upper and lower lines were delayed for 10 minutes to 1 hour and 50 minutes, affecting approximately 20,000 passengers. On the Tohoku and Joetsu Shinkansen lines, 10 up and down trains were delayed 5 to 17 minutes 1/1 Series 01 prototype of the Teito Rapid Transit Company begins commercial operation 1/1 Nagoya Railway Mikawa Line [freight operations discontinued] 1/1 Tokyu Corporation Tokyu Hotel Chain completes contract with Tokyo Hilton and begins operations as Capitol Toky
コメントを投稿
場所: 日本
続きを読む